Statistics for other years:

WriteToThem sent a total of 174,750 messages to elected representatives (and Lords) in the year 2007.

57,459 people answered our feedback survey about communicating with their MP in 2007.

The survey asked whether people had had a reply (not just an acknowledgement) from their representative.

Also, comparing percentage response rates can be misleading: if you are planning to do so, please read more about that on our blog.

Journalists: Please feel free to use the data on these pages, but if you do you must cite WriteToThem.com in the body of your articles as the source of any analysis or data you get from this site. Statistics without a referenced source are dangerous, so please do this.

Note: While some MPs are very slow at responding to constituents mail, that doesn't mean they aren't otherwise active in or around Parliament on behalf of their constituents. You can see MPs voting record, committee memberships and interests on their TheyWorkForYou page.

What do people write letters about?

We don’t look at your messages (see our privacy policy for details), so we don’t know what you write about. However, we do run standard web statistics software, so we know which sites people click through to WriteToThem from. Here is the top campaign website which linked to WriteToThem in each month.

† AnimalAid use a special branded version of WriteToThem. If you would like one, or customised versions of any of mySociety’s sites, please email hello@mysociety.org.

‡ In September we also had a lot of traffic from easyJet, see "easyJet’s cheapo astroturfing campaign downs charity servers". However, they were links from an email, which web statistics software can’t track the source of, so they don’t appear in this table.

Where a site was top for more than one month, it has been excluded from the later months for variety. Non-campaigning sites, such as search engines, directories, TheyWorkForYou, Public Whip, and news stories about mySociety, have been excluded from this table. Most of the campaigns were short term, and their specific page no longer works, so we have instead linked to the top level of the campaigning site.

Did MPs do better this year or last year?

Overall, according to our users’ survey responses, MPs were 1% less responsive to constituents’ messages sent via WriteToThem in 2007 compared to in 2006. Once again MPs have moved to the middle - there are slightly fewer MPs with dire response rates (below 20%) and also fewer with tip top scores (above 80%). Unfortunately, the now fatter bump in the middle has shifted leftwards a bit, meaning more MPs are scoring below 50% than last year. More details in the full MP Responsiveness League Table. 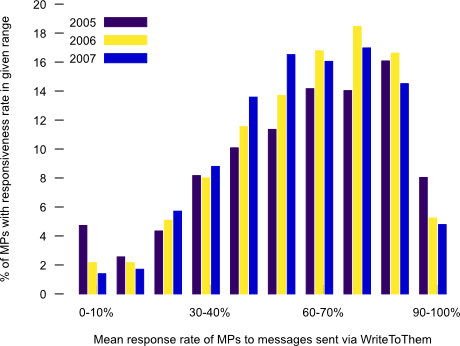 Making it easy to write to the politicians who represent you – even if you don’t know who they are.

Your donations keep this site and others like it running

Data by GovEval. Hosted by Bytemark. .

mySociety is a registered charity in England and Wales (1076346) and a limited company (03277032). We provide commercial services through our wholly owned subsidiary SocietyWorks Ltd (05798215).